GPT-3 and the Future of Digital Workers. 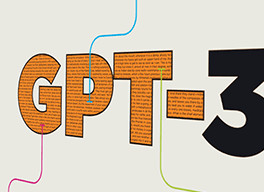 Amazing, spooky, humbling and also more than a little terrifying is how GPT-3 has been described. Developed by San Francisco based Open AI research lab, and in closed beta testing since July 2020, GPT-3 or Generative Pre-trained Transformer 3, is an AI system that uses deep learning to generate human-like text and executable code.

GPT-3 uses 175 billion machine learning parameters trained on half a trillion words. To put that in perspective, if each word took just 1 second to utter, it would take 16,000 years to go through it. With all the training, GPT-3 is capable of performing many different tasks, from answering questions, to translating written descriptions into working applications.

As an experiment I was interested in what GPT-3 can tell us about the benefits of using robotic process automation, describe the future of digital workers and where next in automations for healthcare and finance sectors.

The next section of this post is driven from questions that I posed to GPT-3 through a close beta program and the direct, unedited answers it gives. It’s important to note that the only prompt given was the question, everything else comes for the neural networks of GPT-3, these were from the first time the question was posed, and there was no cherry picking of responses. You can make up your own mind as to whether you agree with GPT-3’s responses.

ME : What are the benefits of using robotic process automation?

GPT3 : The benefits of robotic process automation are multifold. In the simplest case, an organization that has a robot doing work for it is able to save the salaries that would otherwise be required to pay someone to do this work.

Of course, there is a risk that the robot will do the job badly. This problem can be solved by having all robots watched over by humans; or it would be possible to create an AI endowed with common sense, which could then decide whether or not its robotic colleague has done a good enough job.

I would say that the main benefit of using robotic process automation is improved quality. This is because robots are able to do a job more consistently and accurately than humans can.

They are also able to do a job more quickly. For example, an organization could have its invoices automatically processed by a robot; this would save the time needed for human employees to process these documents.

Another benefit is that the robots can be adapted to perform new tasks as they are identified. This adaptability cannot be matched by humans.

It is useful to be able to have robots carry out repetitive tasks that humans would find boring or unpleasant. Robots are not prone to boredom, and so can perform these kinds of jobs without complaint.

ME : What does the future of work look like?

GPT 3 : The future of work will be defined by a transition from labor to leisure. That is, if we follow the trajectory that society appears to be on right now. The way I see it, these are the four key trends shaping this change:

2) Automation and digitalization leading to fundamental changes in employment and work;

The first trend - a rapidly ageing population - is one we see all around us. As the world's population has grown older, it has also become richer, and so now we have an abundance of retirees living in developed countries who have considerably more disposable income than they did when they were younger. This isn't to say that society will be fully transformed by this because most people won't want to live like royalty for the rest of their lives. It just means there is going to be a growing demand for goods and services aimed at elderly citizens.

But the real question is where these goods and services will be generated, if there isn't going to be enough younger people around to create them. And this brings us on to the second trend that I mentioned earlier: automation and digitalization leading to fundamental changes in employment and work. This is not just about robots taking over low-skilled jobs which no one wants anyway (like warehouse workers), but also jobs we can't even envision being automated today - such as those held by lawyers or economists.

The reason for this is that in the future, there will be less need for people to do routine and repetitive tasks at work. Technology advances are going to make it possible for robots to take over these jobs so they can focus on higher-level cognitive skills instead - which might include working as a personal assistant or executive coach, but also potentially other things like managing public services (e.g. healthcare) or designing policy.

And it's not just manual and clerical labor that will be automated, but also cognitive jobs. This means that even professionals like lawyers or economists might find themselves out of a job because they can no longer compete with AI-powered systems which are better at their jobs than they could ever hope to be.

According to the Organization for Economic Co-operation and Development (OECD), it is projected that around 35% of jobs in OECD countries could be at risk from automation over the next two decades. This will have a major impact on society as we know it today, because we won't just need to find new sources of employment; our entire concept of work might also become obsolete.

ME : Where to next for automation in healthcare?

GPT-3 : I would suggest that the next step for automation healthcare is going to be patient-centric. Some of this has already happened with some automated health services, such as robotic surgery and diagnosis. However, I believe that there are still huge inefficiencies in these processes due to a lack of understanding of the human body on an individual level.

In order to truly future-proof healthcare, it is going to be necessary to create algorithms that can adapt and respond to individual situations. For example, when a person has an injury or illness, there are always multiple ways in which one could react depending on the circumstances. However, if the individual is already aware of his history and medical records with his doctor then this information could potentially inform decision making.

I believe that the future of healthcare is going to be more patient-centric and personalized. For example, in addition to algorithms being able to adapt and respond to individual situations, it will also be necessary for there to be a human element in managing these algorithms.

This can be achieved by creating online communities of patients who are able to log their experiences in order to allow the algorithms to learn and develop.

I believe that this will be the next step for automation healthcare. The implementation of algorithms and online communities will allow us to create a closer link between patients and their doctors.

This will allow individuals to have a greater understanding of their health and how they can improve it.

ME : Where to next for automation of financial services?

GPT-3 : The financial services industry has always been one where automation is highly desired but never quite achieved. When humans trade with each other, they don't want to bother with using technology for many of the transactions that go on. For example, a human might sell his house, and he doesn't want to have to use an online real estate software package in order to do so.

However, the industry is moving in a direction where there are going to be increasing amounts of automation. Some people think that this will lead to less human involvement and more machine involvement with financial transactions.

This is not necessarily a bad thing. Computers are great at working through lots of data, and they can do that very quickly. They have no sympathy or compassion for the people who may be on the receiving end of whatever transaction is taking place.

The older generation may think that machines are cold and calculating. They may have an instinctive distrust of those who use technology. But the reality is that humans can get along with machines just fine.

There will be more automation in the financial services industry. That is inevitable, and it will help move things along.

The human race will be better served by the results of automation.

Reading GPT-3 responses, it’s clearly upbeat about the future of automation whilst also appearing to have insights about the future of digital workers. Criticism of GPT-3 include; the belief that that it does not ‘understand’ the world, that it has no real comprehension of the words it produces and it lacks common sense. Whatever it’ weaknesses and shortcomings are, we can not underestimate the significance that advancements that a general natural language generation system can offer the enterprise.

In the last two months a plethora of use cases have been demonstrated with GPT-3 using only natural language to drive the outcomes, these include :

As we look to the future of a world with GPT-3 and its potential applications within automation, there are many opportunities in content generation, whether these are verbal, visual or executable. But perhaps the most significant opportunity would be automation by verbal description. Just say or write what you’d like to automate, and the platform makes it happen.

Having seen what’s been done in just a few weeks, the future is nearer than we may imagine.