RPA Technology and the Next Generation 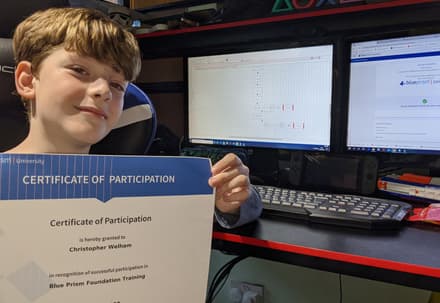 Recently, Ana Howes (Global Head of Education) and I had the pleasure of being introduced to 11-year old automation enthusiast, Christopher Welham. I was initially made aware of Christopher and his automation activities by his father, Andrew, who reached out to see if we could help Christopher get access to the Blue Prism platform as he was interested in learning more.

After an email exchange between Andrew and I, and support from Ana and her team, we were able to set Christopher up via Blue Prism University. From here, Christopher spent the next few weeks working his way through the Blue Prism training platform.

Once this was completed, Andrew sent me an email explaining how his son had completed Blue Prism University’s Foundation training in under 3 Weeks! After discussing this amazing achievement with Ana we decided we needed to meet Christopher to learn more about him and his journey.

We agreed on a date that worked during half-term, and set up a video call between Christopher, Andrew, and I. We did not expect to be presented with someone who was so incredibly relaxed and confident while talking about a technology that is currently supporting 1000’s of customers across the world, however, his confidence was the tip of the iceberg for our call.

Christopher’s thirst for knowledge around technology was hugely present during our call, and the passion Christopher portrayed when talking about software and what could be done with it was infectious. He told us he has a love of Math, Computers, problem solving and Gaming (although not addicted to Fortnite) He quotes that “I love how amazing it is that you can chat with people all around the world using a computer.” Christopher then went on to explain more ideas he had around being able to interact with others through VR. By doing this “nobody would ever miss a birthday party, prom or gathering, even if they are ill or unable to attend, because we can use technology to connect everyone.”

For me, what was really apparent was the passion and how limitless the world was for Christopher. His belief in staying connected to everyone and using technology to help everyone’s life was truly moving. Seeing the world with no restraints is one of the purest capability technologies allows us, anyone with the same belief system as Christopher can achieve anything. In his own words Christopher stated, “everyone is bad at things until they learn and practice, then they will be good at it.” If there was ever a clearer message that resonated what the future of technology really looks like this was it.

Because of the spare time Covid-19 and self-quarantine has allowed, Christopher decided to set himself a challenge to keep himself occupied. The challenge involved using Digital Workers to integrate with the things he already does to make his life easier, from simple things like “logging in” to, and interacting with creative platforms like Microsoft Paint or online games like Fortnite or Roblox. Ana issued an additional challenge when she asked Christopher to work with Blue Prism to achieve his certification. This would make Christopher the youngest Blue Prism Developer on the planet (too my knowledge at least)! To guide Christopher on this journey we have assigned a dedicated mentor from the Blue Prism Center of Excellence.

To be exact it took Christopher 16 days to complete the foundation training – that’s about four hours a day, totaling 64 hours. Hopefully this will inspire anyone thinking about becoming certified to go for it!

Personally, I believe young men like Christopher are the foundations to a brighter future, and if I learnt anything from our interactions it would be that anything is possible, everyone can be a digital entrepreneur. Whether that be at home with Alexa or at work using complex, poorly integrated systems. The right blend of passion and fortitude which we saw in Christopher can truly make anything possible. If I had one request for anyone reading this blog, please understand that Blue Prism is an opportunity for everyone to define the future founded on automation. With the right fortitude and belief, you could be the next automation developer, architect, delivery lead or scrum master of your tomorrow.

Interested in becoming Blue Prism certified? Check out Blue Prism University - we'd love to hear your story should you decide to take on the challenge!