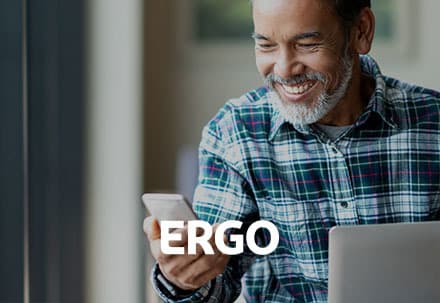 To process 80% of over 4000 claims made simultaneously

Intelligent automation is about creating a positive mindset about digitization and becoming a more modern, efficient and smarter company as a result."

ERGO is a German-based insurance company represented in 30 countries. Part of the Munich Re Group, ERGO provides its 18 million customers in Germany with access to a suite of insurance products, including motor insurance. Hailstorms are rare in Germany, but when they happen, they place acute demand on resources as thousands of customers make claims at once. ERGO needed a way to better serve its customers. The silver lining they found was intelligent automation.

Having been created through a series of mergers and acquisitions, ERGO realized it was laboring under operational inefficiencies. They were affecting profitability. ERGO needed to address these issues and redefine itself as a smarter and more digitally enabled insurer. Improving customer service and experience was also critical. ERGO looked for an opportunity to improve the claim submission process and enhance the customer experience in a stressful moment. In Germany, hailstorms are rare and unpredictable. But when they happen, they typically affect many customers in the same vicinity. The result is a large and immediate spike in insurance claims, which ERGO was struggling to process quickly. The situation was made even more challenging by ERGO having only a limited number of staff qualified to assess a hail damage claim.

Hailstorms are hard to predict, so it’s impossible to scale human resources to respond. Instead, ERGO gave the task of collecting customer claims to Blue Prism intelligent digital workers. During hailstorm season, a phonebot asks customers if they’re calling to report hail damage. The phonebot understands customers’ responses using natural language processing, which includes the ability to identify regional German dialects. Once the questions are answered, the data is passed to digital workers who register the claim and send updates to customers on its progress. Processing of the claims and employing local service partners to assess and repair the damages is fully automated once triggered by the digital workers.

Since deployment, intelligent automation has significantly improved ERGO’s ability to process hail damage claims. For instance, when one storm affected over 4,000 customers, 80% of the claims were fully processed including repairs and pay-outs within a week thanks to digital workers. To date, ERGO has deployed 70+ Blue Prism digital workers in 25 departments, including customer service, cash and credit management, HR and insurance.

Join the Automation Revolution with RPA and Intelligent Automation

The CIO Perspective on Achieving Automation at Scale