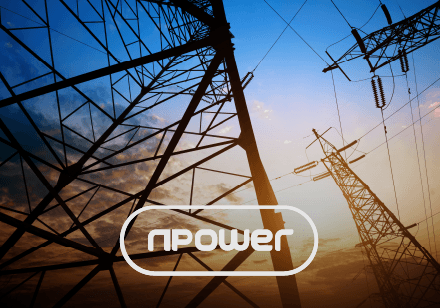 250 processes optimized across the business

delivery of new automations due to solid governance

“The system works best when you feed the right people the right work. A developer isn’t necessarily the best person to send out into the business to look for work and the scope of their role can quickly become quite varied and complex. It really worked for us to have developers just develop.”

In the UK, npower is known as one of the “big six” energy suppliers. As one of the dominant players in the market, npower is no stranger to operating under pressure, and in highly competitive conditions. Like all businesses facing such challenges, npower constantly looks for ways to increase its efficiency and maintain its position. And in 2008 they became an early adopter of a powerful technology and embraced intelligent automation.

npower has had to continually operate under challenging and highly competitive conditions. More recently, the energy provider's market share was being eroded by niche suppliers with low overheads and the ability to undercut prices. And npower’s parent company was pressuring them to reduce costs. To thrive under these conditions, both historically and today, npower has needed to work hard to remain agile and adaptable. But for an organization of npower’s size, this has not come easily. npower needed an edge.

In 2008, npower ran its first Blue Prism intelligent automation process. The organization quicky saw the advantages and efficiencies gained and committed to further optimization. But what makes npower’s intelligent optimization journey such a success is the method they’ve used to deploy the technology. The utility implemented a phased approach for delivering automations.

And this governing model has paid big dividends. From just one process in 2008, at its peak npower had automated 250 processes across its business introducing a new automation every five weeks and quadrupling their previous output. All of this work equated to digital workers processing 18 million transactions in one year alone.

Achieving Agility at Scale with Intelligent Automation and Combinatory Innovation

At Danica Pension 20% of the Workforce is Digital