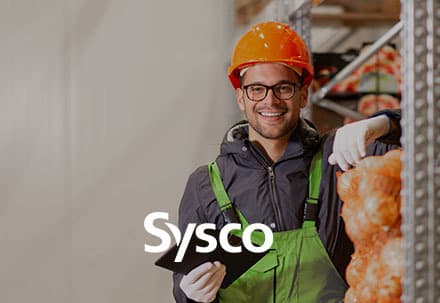 Work hours returned to the business

Automation had become a critical need almost overnight and in every area of our enterprise. It was time for us to put what we had planned and theorized into action.

Headquartered in Texas, Sysco is the world’s largest broadline food distributor, serving over 600,000 clients in 90 countries. When Sysco’s operations were suddenly impacted by COVID-19, they had already established a fledgling automation program. However, the question became, “Could Sysco rapidly scale its automation program without sacrificing the team’s commitment to operational excellence?” Thanks to the team’s efforts and the flexibility of a Blue Prism digital workforce, the answer was yes.

As the largest distributor of food and food-related products in the world, Sysco depends on a vast and complex distribution network to serve its 600,000 clients. This network was placed under huge strain when the pandemic disrupted the world’s economy. Fortunately, prior to COVID-19, Sysco had established a small automation team comprised of nine human and 12 digital workers. The team embraced a high performance mindset underpinned by core operational foundations. So, as the full effects of the pandemic impacted Sysco’s operations, the automation team was called upon to bridge the gaps. The challenge faced by the team was immense: scale up quickly to meet the demands of Sysco’s entire operation without sacrificing operational excellence.

While the automation team had theorized how it might deploy more digital workers, COVID-19 made putting those plans into practice an acute business priority. An Amazon Web Services (AWS) cloud customer, Sysco’s cloud strategy was a critical linchpin to help scale their automation initiatives. The company uses AWS to run Blue Prism in the cloud. The instantaneous nature of cloud deployments allows Sysco to “spin up,” or activate, Blue Prism digital workers wherever needed across the operation and scale them as exponentially as business demands.

Today, Sysco has grown to 60 digital workers who collectively process 6.2 million transactions and return more than 250,000 work hours to the business—all during a trying global pandemic, without sacrificing operational excellence.

Proximus Gives Its Employees a Boost by Hiring a Digital Workforce

Join the Automation Revolution with RPA and Intelligent Automation