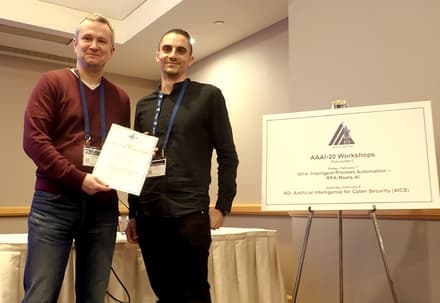 The AAAI-20 Workshop on Intelligent Process Automation (IPA-20) was held at Hilton New York Midtown, New York, USA on February 7th 2020. The goal of this workshop was to exchange ideas and foster discussions on the integration of advanced AI techniques with Robotic Process Automation (RPA). The invited talks and paper presentations centred around the learning of structured and executable processes (programs) from human demonstrations, natural language instructions, or interactions with a software environment.

RPA aims to provide software robots (softbots) that can mimic human users to perform all kinds of mundane and repetitive tasks on their computers, with higher accuracy and speed. Since the term RPA was coined by Blue Prism in 2012, it has quickly spread through the business world. RPA is now the fastest-growing category of the enterprise software market (Gartner, 2019), and it is expected to reach $10.7 billion by 2027 (Grand View Research, 2020).

AI is promising to take RPA to new heights by not only equipping RPA softbots with various intelligent data processing skills (in computer vision and natural language processing etc.) but also offering novel approaches to the creation and training of RPA softbots. Although RPA is a very hot topic in the software industry today, it has not received sufficient attention from the AI research community yet. This AAAI-20 Workshop on Intelligent Process Automation (IPA-20) is, to our knowledge, the first-ever workshop dedicated to RPA in a major AI conference. It successfully brought together researchers working in a variety of fields, most notably process mining, program synthesis, and interactive task learning. The participants came from leading academic institutes (CMU, Columbia, Tokyo, etc.) and industrial labs (Microsoft, IBM, Samsung, etc.)

The workshop received 29 new submissions and accepted 13 of them after double-blind peer-reviewing (acceptance rate = 45%). The 8 accepted papers about improving RPA in general with AI were presented orally in three sessions; while the other 5 each addressing a specific problem in RPA (such as handling invoice forms) were presented as posters. Among the oral paper presentations, one important theme was about the different aspects of automating business processes including discovery, comparison, evaluation, and optimization; another major theme was about the possible ways to build and enhance RPA softbots via natural language conversation. The concrete techniques ranged from symbolic logical reasoning to neural network based deep learning and reinforcement learning. In particular, we would like to express our thanks to Yara Rizk from IBM Research who presented not only her co-authored paper about a unified conversational assistant framework for business process automation but also another paper about the discovery of business process structure using LSTMs on behalf of her Chinese colleagues.

The first keynote speech was given by Sumit Gulwani from Microsoft Research, the father of the popular Flash Fill feature in Excel. He led a grand tour of recent developments in program synthesis (which enables non-programmers to create programs easily from natural forms of intent expression such as I/O examples), and also illustrated its wide potential applications in RPA including automated data extraction (from various sources like web-pages/text-files/PDF), data transformation (over strings/JSON), data querying, as well as generalization of repetitive actions in traces. This topic was echoed by a paper from the University of Melbourne and the University of Tartu which described how state-of-the-art program synthesis methods were adapted and optimized to analyze user interaction logs and identify repetitive data transformation routines that could then be automated by RPA. Due to their contribution that spanned across process mining and program synthesis, the authors of the above paper received the Best Paper Award.

The second keynote speech was given by Joyce Chai from the University of Michigan who is well known for her research in recent years on interactive task learning where humans can teach robots new tasks through natural language communication and action demonstration. She laid out the key challenges in grounding language to perception and action as well as grounding communication between humans and robots. The discussion of those research issues continued in another invited talk given by Toby Li from CMU. He explained in detail PUMICE, their newly developed end-user programmable softbot based on a multimodal domain-independent approach which seamlessly combines natural language programming and programming by demonstration. A highlight of PUMICE is that users could define new procedures and concepts by demonstrating and referring to contents within the GUIs of existing mobile apps. On a similar note, the runner-up for the Best Paper Award which comes from the University of Munich talked about the development of a conversational softbot (that could answer questions and execute routine tasks for customer support) in a real-world industrial setting where the lack of structured training data was mitigated by the utilization of transfer learning.

Blue Prism demonstrated its commitment to advancing the research in this field by co-organizing the workshop, contributing a co-authored long paper, and fully sponsoring the two keynote speeches, the lunch for workshop participants, and the Best Paper Award.

The papers of this workshop have been made available in an online proceedings (arXiv:2001.05214).

The main content of this workshop report will also appear in the AI Magazine, an official quarterly publication of the Association for the Advancement of Artificial Intelligence (AAAI).